The protofeathers (or Dinofuzz) ... the great mystery of reptilian scales transition feathers. 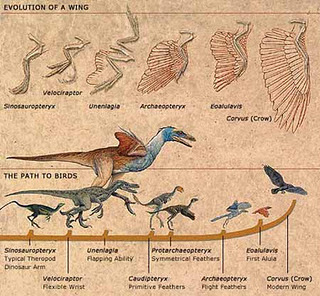 The protofeathers are structures shaped keratin hair or bristle and are considered the precursors of feathers.

Much of all this passionate debate is the date of appearance of the feathers, protofeathers. It is interesting that the oldest fossil
protofeathers are later than the earliest known bird. It makes no sense unless the protofeathers or dinofuzz ​​appeared much earlier (in the Middle Triassic) and therefore would all structures originally present in dinosaurs and their immediate ancestors. Impressions of skin devoid of feathers or protofeathers known (Anatosaurus, Carnotaurus, Tyrannosaurus, etc..) Could be due to a subsequent loss of the outer coating due to the large body mass of these animals (the same reason that the rhinos and elephants have virtually no hair). But this need not be. Anyway ... although I am inclined to this theory, it really is just a theory.

How are the protofeathers?

According to the current expliación: One of reptilian scales ... This is the first spine, then becomes hollow and extends, as it grows, it follows from the skin and forms a cluster of hairs called beards or barbules.

In this video you can see the process of formation of protofeathers.

Why are important protofeathers?

For as we said, are the precursors of feathers. The appearance of the feathers is one of the most controversial issues can be found by paleontologists.

Apart from that it is not clear when they appeared, the experts, agree with in the end, why they left feathers: feathers but now used to fly (the most important feature) is considered to formation of these was a simple cold protection system. A coat of hollow scales isolated from the ravages of time.


Why were transformed into feathers?


Protofeathers are known to be used to maintain body heat and cover the body from the cold. And the fossils discovered (or most) protofeathers concentrations were located on the tail and arms. This allowed them to cover her at night and cover the cold while the temperature down ...

It is no coincidence that birds have feathers on the wings larger (called T-shirts or remiges) and tail (tail feathers or rectrices). They were the first to develop, were the first to appear were also exercising more air resistance. An important feature for small arboreal animals, leaping from branch to branch or thieves fast and small eggs.

What were the first to have protofeathers?

There are several examples of theropods (a group of two-legged carnivores, which is the T. Rex or Velociraptor). Some are: Dilong paradoxus, Sinosauropteryx, Shuvuuia, Beipiaosaurus, Sinornithosaurus, etc ...


But not only are the developers of theropods
Dinofuzz ​​protofeathers or, for example there is the Tianyulong, a small herbivore that is casting doubt on its position in the evolutionary tree and it was discovered 2 years ago.

Finally, there are still many questions to solve, finding fossils and discovering new species. A truly exciting topic of prehistoric life on our planet.
Posted by Angelo Ventura at 11:32 PM