A Scientific Case For Gay Marriage (And Against Divorce): It Makes You Happier 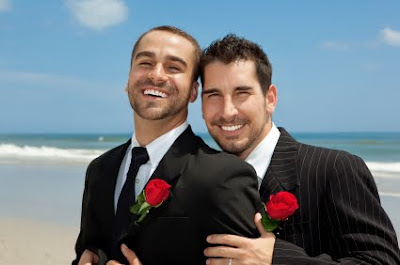 Reviewing an astounding 34,493 people over 15 countries (or, rather, reviewing studies of those people), clinical psychologist Kate Scott has some great news for newlyweds: You're in for a lifetime of happiness. Just don't fuck it up.

Risks of depression, drug abuse, and anxiety plummet when two people get married, regardless of gender, Scott's research finds. And it doesn't even matter if the bride's mother-in-law wore white to the wedding, or nobody bought that new flatware set off the gift registry.

Just don't separate or divorce, because then the Sads will return.

"What makes this investigation unique and more robust is the sample is so large and across so many countries and the fact that we have data not only on depression… but also on anxiety and substance use disorders," Scott said in a statement.

"In addition, we were able to look at what happens to mental health in marriage, both in comparison with never getting married, and with ending marriage."

The study, however, did find that men are less likely to become depressed in their first marriage than women, a factor Scott said was probably linked to the traditional gender roles at home, as other WMH surveys have shown that as women get better educated, depression rates tend to fall.

The other gender difference the study found is that getting married reduces risk of substance use disorders more for women than for men. Scott said this may be explained by the fact that women are usually the primary caregiver for young children.

However, the downside of marriage, the University of Otago study shows, is that ending it has a negative impact on both genders.

"What our study points to is that the marital relationship offers a lot of mental health benefits for both men and women, and that the distress and disruption associated with ending marriage can make people vulnerable to developing mental disorders," Scott said.

But seeing as how marriage equality opponents do not, by definition, want what's best for gays, it's not like they're going to get behind marriage to improve homos' mental health.
Posted by Angelo Ventura at 9:23 AM